The Swedish Institute of Space Physics was originally named the Kiruna Geophysical Observatory (KGO), and was established in 1957 by the Royal Swedish Academy of Sciences. In 1973 KGO became an independent research institute, and was renamed the Kiruna Geophysical Institute (KGI). KGI was renamed the Swedish Institute of Space Physics ("Institutet för rymdfysik", IRF) in 1987. 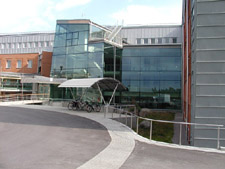 The research activities at IRF in Kiruna concern studies of phenomena in the Earth's upper atmosphere, the ionosphere, and planetary magnetospheres. Ground-based measurements of ionospheric parameters, the geomagnetic field, optical aurora, and radio wave propagation, as well as in situ measurements with satellites are being performed. Various types of detectors for space research are developed and built at the institute.

In addition a number of routine measurements are carried out. These include measurements of the geomagnetic field, optical aurora and ionospheric ionization (with ionosonde and riometers), atmospheric ozone content and infrasound waves. Continuous recording is also carried out of radioactivity (Swedish Defence Research Establishment) and meteorological parameters including solar radiation (Swedish Meteorological and Hydrological Institute).

IRF in Kiruna contributes with teaching and supervision to space engineering programmes run by the Division of Space Technology, Luleå University of Technology, on the Space Campus in Kiruna.